With the temperature plummeting it’s time to roll out some comfort, carb heavy recipes. As pasta bakes are cheap, tasty and very easy to make they can be top of your list.

I say easy but I have just remembered an occasion years ago when I was cooking with my then teenage niece and we suddenly realised, just as we were about to dish up, that we had left out a key ingredient in our tuna pasta bake – we’d left out the pasta. The table was laid beautifully for a Friday night dinner with family but we suddenly had to rush off and boil up the pasta and we decided to serve the tuna as a sauce. That meant no crunchy, crusty pasta topping which is of course the main delight of any pasta bake.

If you watch Chef’s Table (I highly recommend it – it’s on Netflix – profiles of the world’s best chefs) you might have seen the episode featuring Massimo Bottura from Modena in Italy. He’s devoted a whole dish in his restaurant Osteria Francescana called ‘The crunchy part of the lasagne’ which elevates this otherwise simple pasta bake to a culinary masterpiece.

I have to say that I sometimes think I’m the only person in the world who prefers pasta cooked on the soft side rather than al dente. Does this make me a pasta pariah I wonder? Anyway, when you cook a pasta bake my way (cooking the pasta until it is soft but then giving it a long time in the oven to crisp) I think you have the best of both worlds.

You can be creative about what you put in your pasta bake (as long as you remember the pasta of course). Here I’ve used broccoli, cauliflower, fresh spinach and frozen peas. I bought a whole load of broccoli at the market a few weeks ago as it was very, very cheap (about £1 for three large bowls) and I blanched some florets by boiling them in water for a couple of minutes, draining and freezing them. I did the same with some leftover cauliflower. This meant I had ready prepared vegetables for this recipe – and I always have frozen peas in the freezer. 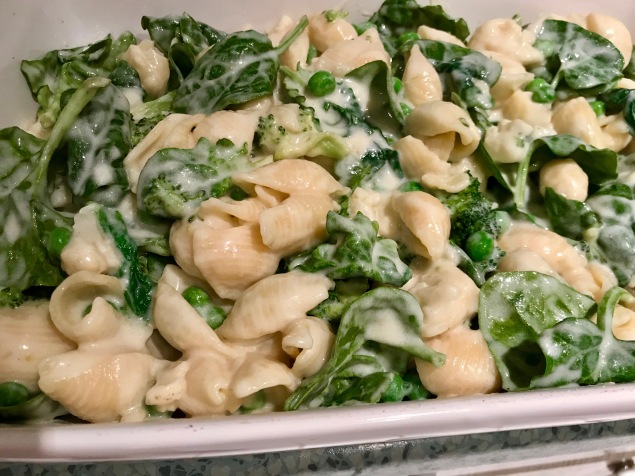 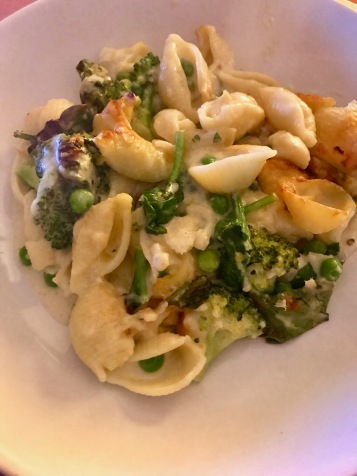