There is so much mystique around soufflés and how hard they are to make that it is only last year that I made my first soufflé. It was so easy I couldn’t believe I hadn’t made them  before. The key thing is to be very careful about folding the whisked egg whites into the mixture – use a metal spoon and don’t over do the folding, you should be able to do it in about 20-30 seconds.

This is a Rose Elliott recipe from her book ‘Vegetarian Supercook’. It’s an elegant vegetarian starter which would be perfect for a Valentine’s Day dinner.

I’ve adapted Rose Elliott’s recipe slightly (leaving out 50ml of double cream which is spooned over the soufflé before the second bake – but add this if you want an even richer version) and I have reduced her quantities to serve two people instead of six. If you can’t get portobello mushrooms any large mushrooms will do.

I served the soufflés with a drizzle of basil oil (basil leaves ground by hand in a pestle of mortar with some good olive oil) and a bunch of rocket. 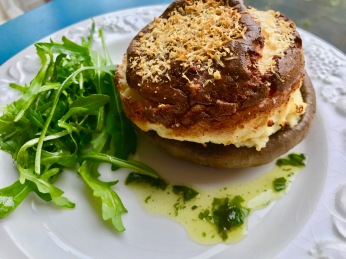